Hyderabad - The land of Biryani 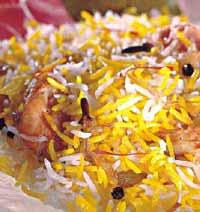 Biryani - A must have for all those who visit Hyderabad. There are a lot of places that serve biryani and in all the years that I have been in Hyderabad I have never been to two places that serve the same kind of biryani. There is a biryani that is called Hyderabadi Biryani but to be frank I never really made out the difference. For all the historians that are food lovers here is one version of the Biryani Story. But then for those that want a Hyderabadi twist to the story here is another version. Well I did a search of Google and I got another story altogether. Enough about the history - let me get down to where one can find some good biryani to eat.

The best Biryani to date that I have had at a price that would hardly pinch your pocket is Cafe Bahar. Its address is - Cafe Bahar, Old MLA Qtrs Road, Hyderguda, Hyderabad. The best way to enjoy the biryani is to take the biryani home and eat. The place is not the cleanest place you would want to be eating your food and neither does it provide the ambience unless you are willing to eat with a zillion people milling about you among a cacophony of voices around. The biryani is excellent and is worth trying out.

Another good place to try out for some excellent biryani is Bawarchi. Its address is - Bawarchi, 66, Alambad Industries Area,RTC Cross Rd. This place has a multi-cuisine restaurant a roof restaurant and a restaurant to just eat as quickly as you can. Once when I visited this place a guy came in ate his biryani and did not have the money to pay and the guys in the restaurant started to abuse the poor chap and the best part was everyone around the man continued eating their biryani's as if nothing was happening around them. That’s how engrossing their biryani can be.

In the old city around the historic Charminar are quite a few places of repute. One of them is Hotel Madina and another is Hotel Parwaaz. But if you happen to go to this bustling part of town there are enough of small road side joints that offer you the best biryani around. The problem with most of these places is that they do not have a decent place to sit and have the biryani but don’t let this deter you from trying out the stuff.

In the Secundrabad area there is always Paradise. The biryani here used to be excellent but of late its kind of gone lower in my list of places that give the best biryani. Nevertheless it is worth trying out and they have different restaurants to cater to your pocket and taste from a garden to a multi-cuisine to an open kind of a shop.

For a more Andhra kind of a biryani there are a couple of places in Ameerpet that are worth mentioning and one is FishLand for is fish and prawn biryani and Anupama for its chicken boneless and fish biryani. Be warned these places have fiery hot biryani guaranteed to give you a Fiery Hyderabad Belly.

If you really don’t feel like leaving the luxury of your home then you can order for the biryani to be delivered to your doorstep. Hyderabad House delivers Biryani and other Hyderabadi delicacies to your doorstep or you can also go and pick it up at the numerous outlets that they have around the city.

For those of you that think you may have missed out Biryani during the day - well don't worry. Green Park at Begumpet provides you some of the best Hyderabadi food that there is to offer during the night. Their Midnight Buffet starts at 11:30 and goes on till the wee hours of the morning and the center of this buffet is a lovely biryani. This is an experience worth checking out.

Phew - This is like just the tip of the iceberg of places that serve good biryani. Now once you get here what kind of Biryani do you have - well that’s for another article on another day.
at August 18, 2005

Hey Sudeep,
Good work man, I just started writing a blog about "biryani"....as you say it's the tip of the iceberg, pls dig some more..i like the way you presented it. Keep it up

How r you doing? I am good. Its been so long that I hit your blog. As I m Looking for some info on the best Moghulai food in Hyderabad. Infact I need this info as i m gonna host a party to some important ppl to me. I want them to taste the Best Hyderabadi food, and so thought that your blog might help me. Do you have any updated info in this regard.

Could you pls suggest me a good place where i could host the party. Thought of Chowmohalla Palace but not sure if small family parties are allowed there, also not sure about the food prices there. I am looking for a place with a the theme that reflects the Nizam's culture. wat place would sugest that suits my requirement ?

Im doing well. How about you ? Been a while since you have come to the office.

Im not sure how big your party is but there are quite a few restaurants you can go to for Peshawari food. There is 4 seasons in madhapur and in Medhipatnam, Paradise, Sahib sindh sultan in city center mall, sigree in somajiguda and Barbaque Nation in Banjara hills opposite city center mall.

All of these places have good kebabs and biryani. You will have to talk to them about hosting a party which i am sure all of them will do.

I will come and meet you in the office on someday.

I will be hosting the party for 5. Thanks alot for sharing the info. My guests want to tatse the punjabi special food as this is the Baishakhi month and I booked the table at Punjabi By Nature in Road No 12 near Ohris. Infact I too tasted the food there and liked it.