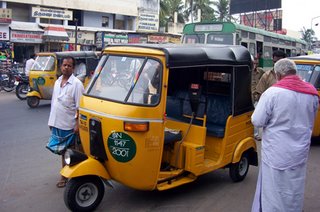 Contrary to popular belief this driver said that the police never bother him as long as he does not break a traffic rule. So it looks like the auto drivers complaining about police being highhanded as one of the reasons for them striking is to just make sure that they can break any rule and the police should not do anything to them - something the city bus drivers enjoy just now.
at July 30, 2006 2 comments: