Showing posts from November, 2012
Show all

About 3 weeks ago I took the plunge to install Windows 8 and office 2013 on my 4 year old laptop that was crawling. It was a spur of the moment decision due to the frustration of my laptop just not responding to me. Now I don't regret that decision at all. My laptop has got a new lease of life. Its much faster and very responsive, the UI looks modern and sleek and all the software that I had on my Windows 7 OS works like a charm. I did not do an upgrade, I did a complete rebuild of my laptop with Windows 8. So that kind of cleaned out 4 years of junk that I had accumulated and I started off with a clean machine. The whole transition from Windows 7 to Windows 8 including backup and restore of my data and installing all the applications I needed took me less than half a day. This is my fastest OS build ever since I started using Windows since way back in 1992. What do I like about Windows 8 1. As mentioned already its fast and responsive. All the applications open so much more
Post a Comment
Read more 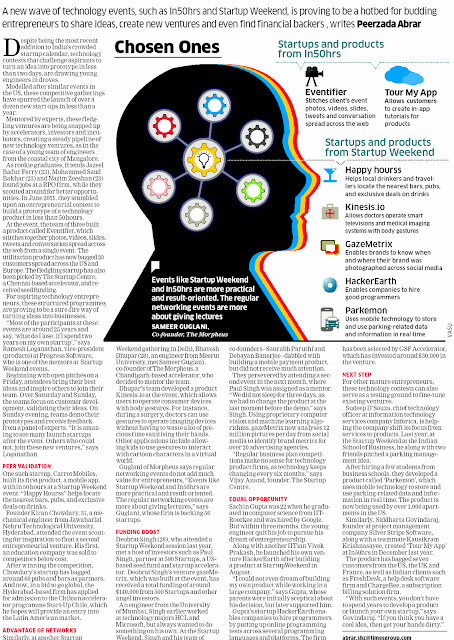 We finally managed to get the Global Startup Battle of Startup Weekend to Hyderabad in 2012. The Global Startup Battle is 138 Startup Weekends happening across the world on two consecutive weekends where the winner from each of the startup weekends gets to upload a video which is open to a global voting. The top 15 teams in the voting get into a semifinal and finally the winner gets a trip to Rio and the Google office in the US along with a lot of other goodies. Since we were time constrained in organizing the event we had less than a month to plan for it and also it happened to be right in the middle of the holiday season and exam season in Hyderabad tickets were hard to sell. We finally managed to sell about 60 tickets with a lot of enthusiastic and excited participants making it down to the Progress office at Madhapur on Friday evening. The event started off with the surprise visit of the Hyderabad Angels who had an open Q and A session with the participants. After that we had
Post a Comment
Read more

Build your brand and assets

November 12, 2012
We have been hiring and time and time again I have come to realize that it is a lot easier to hire smart bright freshers and train them rather than hiring experienced developers. The problem with hiring freshers from databases such as Naukri and Monster is that there are a lot of profiles there that are put up by consultants who fill up the profile with fake projects and experience and it wastes a lot of your time filtering this out. What are the advantages of hiring a fresher 1. They come with no preconceived thoughts of what they want to do. They have an open mind and are willing to take up any kind of tasks. 2. They are open to listening and adopting to the company culture. They fit into the way the company works and functions a lot easier and faster. 3. They enjoy and appreciate everything that is given to them. There are no comparisons made. 4. They stay much longer in the organization and they are much more loyal. 5. They are easier to hire as all you need to judge their
Post a Comment
Read more

6 Challenges Techies have while selling

November 11, 2012
Techies love building products but then they find there are a lot of challenges in going out into the market and selling them. Being a techie myself and now playing a sales role I completely understand these challenges. Challenge 1 : Anything can be built When a sales call is made and the client states a requirement that is not present in the product, the sales person immediately puts on his techie hat trying to figure out how to build that rather than concentrating on selling the product. Very quickly the discussion changes from a sales discussion to a technical implementation discussion. Challenge 2 : Lead evaluation Techies find it hard to evaluate the lead. They find it hard to differentiate between a hot lead and a cold lead. For the techie they believe that every customer is a hot lead and they need to satisfy it because that gives them more work to do. Challenge 3 : Does not accept that the sale is not going to happen Since techies believe that everything is possible for t
1 comment
Read more

Power of intuition and experiential wisdom

In his autobiography Steve Jobs said "The people in the Indian countryside don't use their intellect like we do, they use their intuition instead, and their intuition is far more developed than in the rest of the world. Intuition is a very powerful thing, more powerful than intellect, in my opinion. That's had a big impact on my work," Jobs later recalled to Walter Issacson, the biographer. We see this in everyday life - the Indian intuition. If you observe how traffic moves on Indian roads it looks chaotic and crazy. It looks like everyone is going to crash into one another and we are going to have one big crazy pile up. But we defy reality - there is a method in the madness, there is an implicit understanding between the drivers and pedestrians of what each one is going to do next. Before you drive on Indian roads you have this feeling that its impossible to drive and that you will probably kill a million people if you drive. Hence there is a deep reluctance to
2 comments
Read more
More posts