I got a call about 10 min ago informing me about police firing in Hyderabad. I quickly scanned all the usual news websites and did not find any information. So I decided to do a Google search to see what results it would return and I was truly amazed at what I got. 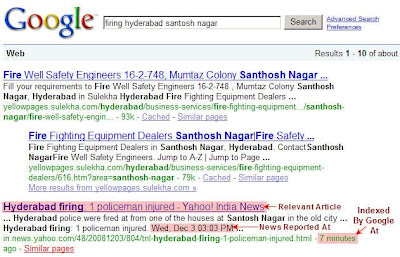 What is amazing is


It is amazing how they got all this information on the search result to help me determine which is the most appropriate answer to my query. It is just amazing how Google manages to deliver exactly what someone needs over and over again and I totally buy into the notion that search is the new navigation method. So if you think your sites navigation sucks incorporate Google custom search into your site and I am sure you will give your users the experience that they want.
at December 03, 2008 6 comments: 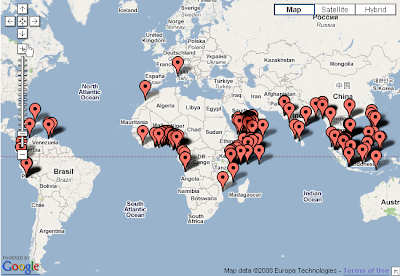 In the same website the page Piracy prone areas and Warnings gives details of the areas that are to be avoided and it is interesting to note that all the areas happen to be around South East Asia, Indian subcontinent and the African coast. I am not sure if this is because of the sea routes that are taken or the number of developing/underdeveloped countries in these regions.
at December 01, 2008 No comments: