The debate around gun control has been going on for some time now but I think the US has reached a point where they have to take some hard and tough decisions around gun control. The second amendment gives the person the right to carry arms but it was written more than 200 years ago when weapons were not as lethal and accurate as they are these days. These weapons can discharge 100s of bullets in a matter of seconds with deadly accuracy and cause maximum damage in a very short while which was demonstrated in such a brutal manner in the killing of 20 innocent children. Its time to take serious decisive action against assault weapons that can discharge large number of bullets in a short time. 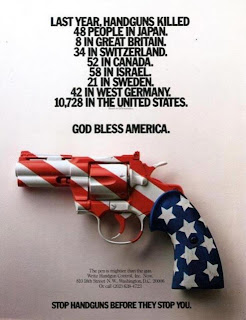 Email ThisBlogThis!Share to TwitterShare to FacebookShare to Pinterest
Labels: Thoughts