Way back in 1993 when I wrote EAMCET, the common entrance test for engineering one was considered brilliant if they managed to get a seat. In that year there were less than 9000 engineering seats and it was easier to get a seat in Karnataka than it was to get one in AP, but the colleges in AP were much more popular and better and everyone wanted a seat here.

Fast forward to 2012, there are 340000 engineering seats and the funny part is that not more than 220000 write the entrance exams for these seats thus making the entrance exam just a farce as anyone who wants to get a seat will get one irrespective of the marks they get in the exam.


Every year since 2008-09 there has been a steady increase of surplus seats but that did not stop more colleges from being opened and more seats being added to existing engineering colleges. Why did this happen? As part of the AP Governments fee reimbursement scheme any family that had an income of less than Rs. 100000 per year as stated by the local government authority was eligible to have the complete fees waived for the engineering course. Given this situation, joining an engineering course had an incentive and in society it was considered prestigious to be holding an engineering degree. Given this increased demand for engineering seats the number steadily grew until there was a glut in the number of seats. 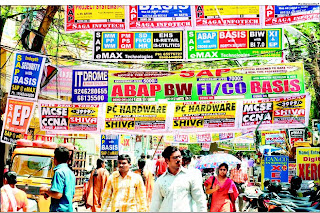 This growth has come at a price - even students who did not have a liking or aptitude for the sciences were doing engineering and at the same time due to the increased number of colleges so suddenly there was a dearth of quality faculty to be able to cater to the demands of the increased number of colleges. This caused the quality of the education to drop drastically, thus making not more than 10% of the engineering students who pass out each year employable.

This is a very dangerous situation. What happens to 90% of these students (approx 200000 students who joined in 2009-10) who have spent 4 years of their lives studying for a degree that is not able to get them a job. Yes, some of them can be re-skilled and trained but for a majority of them they go many years (I have seen students who have spent 3 years) just searching for an appropriate job. This can lead to frustration and anger which is not good for the future of our country.
at October 08, 2012

candidly written. A surplus leads to reduction in quality or makes it more difficult to sift through to find the right quality of candidates.

Add to this, many students cannot find jobs either because they become overqualified for lower skilled jobs or lack the personality traits for their requisite jobs.

Hi Sundeep Good Job your blog is very much informative.Thanks