Why do we have clogged up roads ? 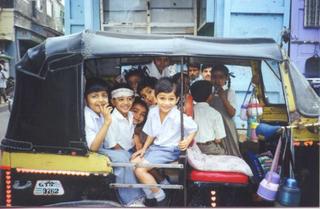 As a follow up to my last article on how road widening and building bridges are very short term solution I would like to answer some interesting thoughts that an anonomous comment has raised.

The first fact that was raised is "Each year, Hyderabad city is adding about 2 lakh vehicles." - well you can't dispute fact. But lets ask ourselves why are there so many vehicles being added

We have moved along from a socialist economy of the 60's to a capatalist economy of the new millenium. In a captalist economy most things sell merely to fill a need and without going too much into Maslow's Theory of Needs I feel that vehicles on the streets of Hyderabad are also there to fill that need. And most of the time the need for transport is a physical need which is the most basic need. 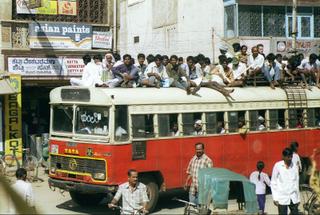 Let me put a question to you - Let's say you have a family of a husband, wife and 2 school going kids and you have to all travel to different parts of town what would be the mode of transport would you have all used in the current situation. Would it have been some public transport or private transport ? I think the answer to this is pretty obvious given the choices that we have in the city today.

The problem that we have is the lack of a credible, trustworthy, quick means of public transport and without that there is no choice but to use private transport. Are people buying vehicles because there are easy avenues to get money - I truly doubt it. If you ask anyone who drives in Hyderabad they will tell you "Driving in Hyderabad is a nightmare and if you can drive in Hyderabad you can drive anywhere in the world". According to me the reason people buy a vehicle is to get around easily - to meet the basic need of transportation. If a public transportation system can meet that need you will automatically see a reduction in the number of vehicles on the roads.

Let us take for example Mumbai, what would have happened if there was no suburban rail system there ? No one would have lived in the suburbs, they would have all lived in the city close to their work place. They would have all had vehicles if they could afford it or if they could buy it on credit. Wouldn't the city look awfully similar to Hyderabad ? The difference is there should be an alternative and right now there isn't one here in Hyderabad. The existing public transport limits itself to busses and MMTS which just does not meet the need. 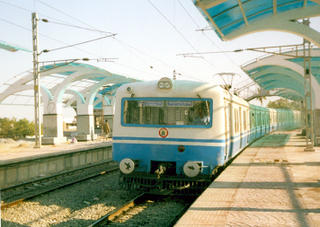 The comment goes on to talk about the capital needed for a metro rail or a MMTS project. The answer to this is yes we do need large capital for such projects but we need to make the sacrifices to put in this capital. Other cities in India have successfully started implementing metro projects such as Delhi, Chennai and a lot before everyone else Kolkatta. I don't see people in any of these cities complaining. Is it used only by the top 1 % of the society - I really dont think so. Not with the rates of the Delhi Metro Rails as follows. Capital investment in large infrastructure projects is the only way problems as large as what we are facing today can be solved. Once we provide a viable alternative such as a metro rail system you can tax the private vehicle users you can increase tolls for parking and using the city's roads and bridges, but until you provide a viable alternative there is nothing you can do.

The world over a good public transport has worked in almost every metro why shouldn't it work here?

"Let's say you have a family of a husband, wife and 2 school going kids ......what mode of transport would you have used ?"

I would say, anything from two scooters to 'two cars, one scooter, one school auto rickshaw for the younger child and a bus pass for the older child.It wouldnt be a bad idea to do a survey on that!
Meanwhile, a significant proportion of the over 100,000 autodrivers in this city fit your description of a typical family. They survive on anything from 3000 to 6000 per month mostly in single room tenements, often defaulting on auto rents or finance instalments especially in months when one of the children falls sick... perennially on the brink of bankruptcy and suicide, and constant dread of cops and financier's goons who will confiscate the autorickshaw. Nobody maintains statistics on suicides among auto drivers, but you can look up the newspapers of the last three years.
The new millennium's new capitalism operates with new rules that Maslow couldnt have dreamt of. (Not that he had a great grip on the old capitalism itself but that is a different matter.)

"If a public transportation system can meet that need you will automatically see a reduction in the number of vehicles on the roads."

Thanks for the metro fare chart and in return I can only offer this link:
http://www.frontlineonnet.com/fl2215/stories/20050729005711300.htm
Look carefully at how the metro actually sustains itself and who it serves and why it is so. Frontline does have a socialist slant but the arithmetic in this article cannot be accused of being partisan. Meanwhile, Delhi is about to ban tricycles because apparently some brilliant demographer figured that poor people from villages are flocking to Delhi because they think they can make a living by transporting people in them.

Well, we could start by asking two questions in whichever order:
1. Really, really why dont we have a 'good' public transportation system in this city or in Delhi or even in the US ? (a rather remote one but a hint nevertheless: http://www.busridersunion.org/engli/index.html )
And dont forget that it was the passenger car and the oil industry that finished off one of the most wonderful transportation systems in the world the railroad industry in the US. This is a pretty well documented fact.

2. Just at what hypothetical point of time do we decide that we have a good public transportation system?
Cheers!

Also, it may not be a bad idea to ask why the family you just described needs to so frantically rush everyday to so many different parts of the town. What if every neighborhood had a decent school ? What if Hyderabad had a better zoning and building regulation system and a better implementation system ? wouldnt it reduce the number of trips? well then why doesnt every neighborhood have a decent school ? in short what if Hyderabad had enacted its masterplan instead of sitting on it for so long and tinkering with it at the request of every tom, dick and harry who comes up with a proposal on how to make money ?
come on, seriously is the FSI something on which the cabinet is equipped to take a decision as they did a couple of weeks ago (increasing FSI for five star hotel proposals in Banjara Hills) and the MCH giving away extra FSI as if it is a toffee, to be taken wherever one please if only he or she gives a few yards of his building space for road widening. in your list of reasons why road widening wont help, you missed out another simple fact: each road widening effort in this city is resulting in the addition of vertical space on the same road which brings many more vehicles on to that road. this simply because the government is permitting extra FSI so that roads can be widened. just keep looking at all the shopfronts in Himayatnagar road which is being widened now!

Hi Sudeep, Nice blog you have here,
and this write up ,especially, is really spot on.Especially your comment:-
"Capital investment in large infrastructure projects is the only way problems as large as what we are facing today can be solved. "
Fully agree with you..
There has to be sizeable investement in building up a sufficient infrastructure for the same, and as the problem itself is of a huge nature, the project itself has to be a huge one..

Hope to see more of your gr8 writeups...

Wish u all the best,
Riz